Customizing the Start menu layout in Windows 8.1 with Group policies

Previously I talked about how to read the start menu pinned items and their group details using PowerShell. If you have missed that article, read it from https://techibee.com/powershell/query-start-menu-groups-and-pinned-programs-in-windows-8-1-using-powershell/2395 . In this post I will share my thoughts on customizing the start menu layout for Windows 8.1 based users using Group policies.

In my previous post, I have used Export-StartLayout cmdlets to export the start menu pinned items configuration. When I was using that cmdlets, I came across Import-StartLayout cmdlets which I thought can be used for importing the start menu layout. But after some reading, I understood that it is used only for importing into build images. So, this is not useful for deploying a standard new (or updated) start menu style to existing users who are already using Windows 8.1 desktops.

While searching for ways to do it, I came across a group policy named “Start Screen layout” at below path in group policy console. 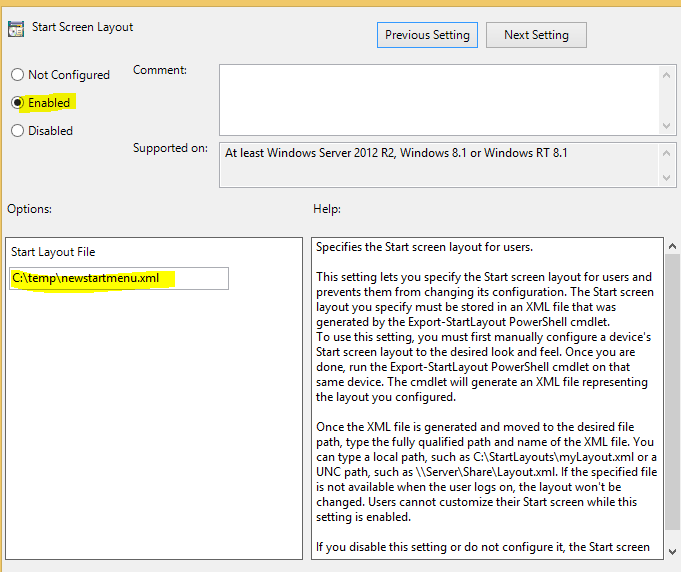 To use this setting, you must first manually configure a device’s Start screen layout to the desired look and feel. Once you are done, run the Export-StartLayout PowerShell cmdlet on that same device. The cmdlet will generate an XML file representing the layout you configured.

Once the XML file is generated and moved to the desired file path, type the fully qualified path and name of the XML file. You can type a local path, such as C:\StartLayouts\myLayout.xml or a UNC path, such as \\Server\Share\Layout.xml. If the specified file is not available when the user logs on, the layout won’t be changed. Users cannot customize their Start screen while this setting is enabled.

If you disable this setting or do not configure it, the Start screen layout won’t be changed and users will be able to customize it.

So, I enabled this policy with the exported XML file that I captured with Export-StartLayout. It worked as expected but with a few caveats.

It worked but took away a few things users/administrators really need. After applying the style through Group policies, noticed the following.

So bottom line is that, you should keep above points in mind before deciding to deploy start menu layout using Group policy. Setting a default layout in build is a good idea in my opinion.