I went to my friend room last week to see cricket match. He got a new mobile phone and trying to copy all his favorite songs into it. After copying a few he realized that, file name that appearing his laptop and display name in phone are not same for songs he is copyin 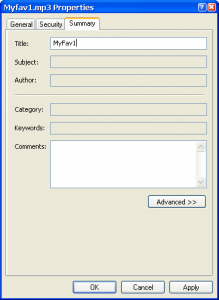 g. He disappointed and figureout that he has o change the title of each song by going to properties of each mp3 file. As I just sitting beside to him, he asked me if I can automate anything there to speed up the process. He has lot of MP3 files in such manner and thought of helping him with my favorite powershell scripting.

I authored a small script, which reads files of given extension type and changes the title of them to file name. So that music players shows the same name when playing…