By this time we as administrators could have noticed that disk cleanup utility is missing in Windows Server 2008. Disk Cleanup/Clean Manager (cleanmgr.exe) is not appeared by default in Volume Properties. Need to follow few steps as below to clean up the volume.

So in order to use cleanmgr.exe you’ll need to copy two files that are already present on the server, cleanmgr.exe and cleanmgr.exe.mui. Use the following table to locate the files for your operating system. 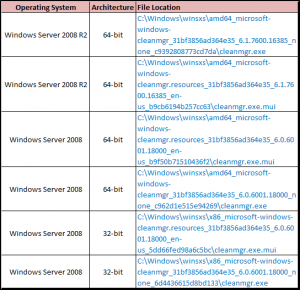 Once you’ve located the files move them to the following locations:

Next post: How to configure windows event forwarding in Windows 7/2008 – Part-1

Previous post: How to know the switch name to which your server is connected